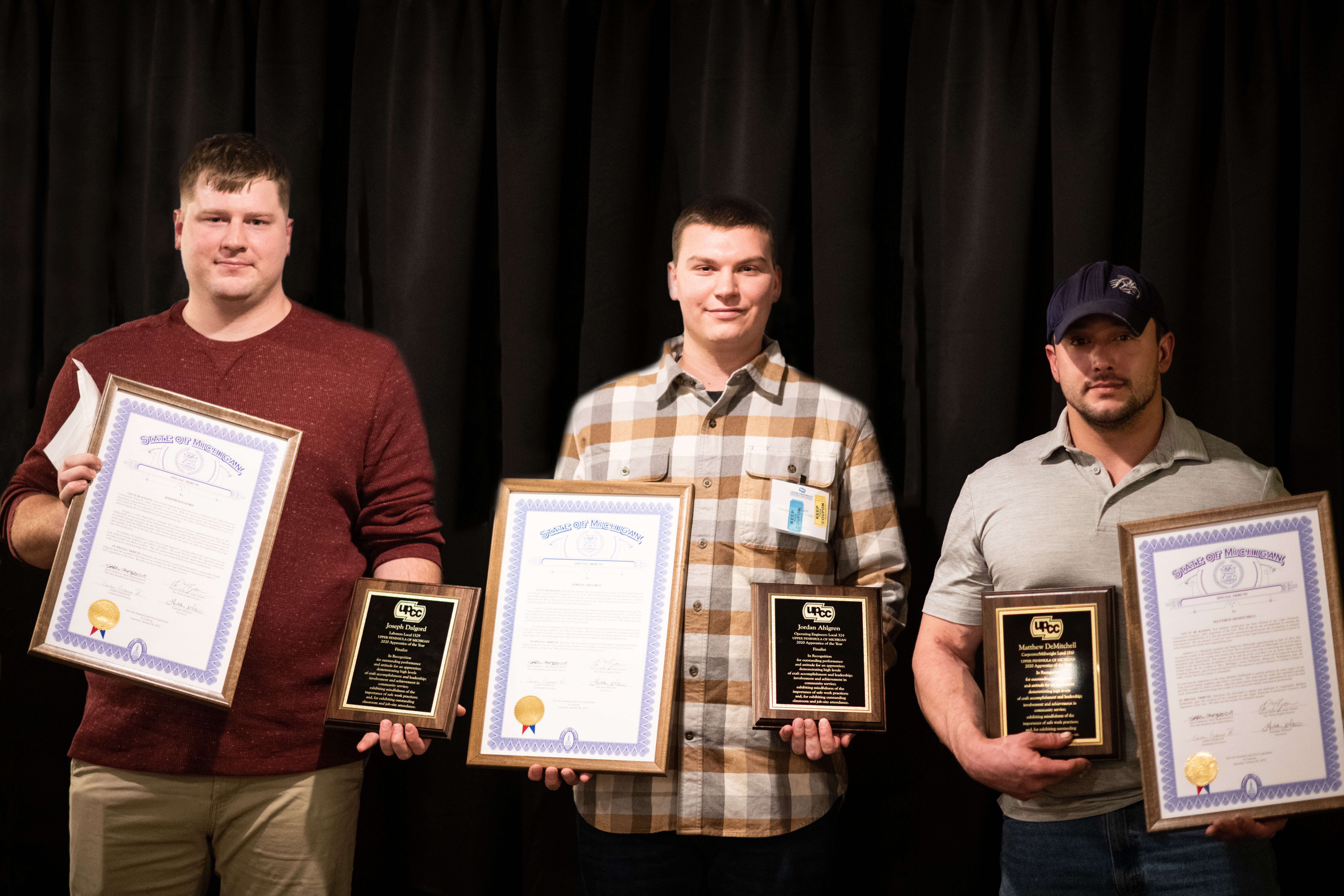 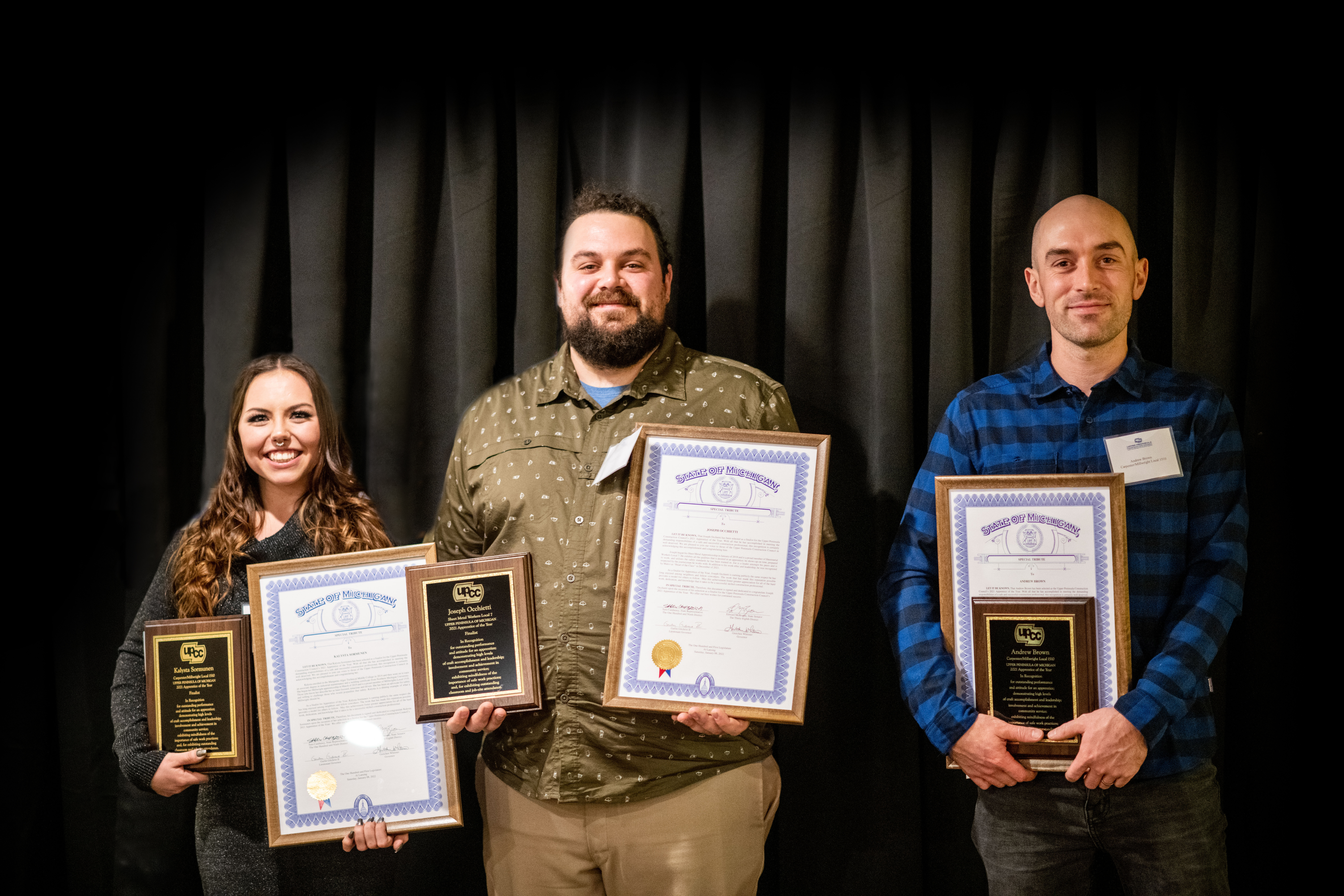 Almost 200 people attended the 2020/2021 Upper Peninsula Apprentice of the Year recognition banquet. This event is organized and hosted by the Upper Peninsula Construction Council (UPCC) to recognize outstanding apprentices in the U.P. construction industry. This event has been held since 2010 annually except for 2020 when it had to be cancelled due to Covid-19.
2020 Apprentice of the Year - Matthew DeMitchell - Millwrights Local 1510
Matthew is a Marquette graduate and began his Millwright apprenticeship in June of 2016 after serving his country in the Airforce. He is respected by his peers as a leader who ensures all he works with are exercising the required safety so they can go home safely to their families at the end of the day. He has worked in Ohio, Michigan’s Lower Peninsula, Minnesota, Washington State, the Carolinas, Kentucky and of course right here in the UP. The amount of sacrifice Matthew is willing to endure to make a better life for his family is remarkable.
2020 Finalist -Joseph Dalgord - Laborers Local 1329
Joseph is a 2012 Rapid River Graduate who began his Laborers apprenticeship in June of 2017 and served in the Army National Guard. He is known as a leader amongst his peers who shows up early to work and ensures everyone works safely utilizing OSHA principals
2020 Finalist - Jordan Ahlgren - International Union of Operating Engineers Local 324
Jordan is a 2018 Gladstone graduate and began his Operators apprenticeship in June of the same year. He is known as a team player who exhibits professionalism and takes great pride in his craft. Jordan is incredibly reliable and leads his peers by example
2021 Apprentice of the Year - Andrew Brown Carpenters Local 1510
Andrew began his Carpenters apprenticeship in November of 2018. He has been a driven student who excels in managing the process, problem solving and ensuring safety. He believes “safety is about caring for people” and is a leader amongst his peers. He is so well respected he was invited to a round table with Governor Whitmer at the MRCC Training Center.
2021 Finalist - Kalysta Sormunen - Millwrights Local 1510
Kalysta enrolled in the Marquette-Alger Technical Middle College in 2014, she earned an associates degree in industrial maintenance and a welding certificate from Northern Michigan University. She began her Millwright apprenticeship in March of 2019. Those who know her believe she is laser focused, tenacious and driven. She has been an advocate for safety and willing to challenge those who would jeopardize that safety. Kalysta is a shining example of what a Millwright should be.
2021 Finalist - Joseph Occhietti - Sheetmetal Workers Local 7
Joseph began his Sheet Metal Apprenticeship in January of 2018. He exhibits all the qualities we seek in an apprentice; he shows up on time, prepared to work and utilizes the safety standards he has been trained in. Joe is a leader amongst his peers and is respected by the journeyman he works with. He was recognized by Malco as “Head of the Class” in December of 2021.
The selection panel was made up of James Ebli, Gundlach Champion, Inc. retired; Roxanne Daust, President and COO, Range Bank; Don Maki, Commissioner, Federal Mediation and Conciliation Service; Mike Fornetti, Mead/WE Energies; and Mike Andary Assistant Professor, TAS, Construction Management Northern Michigan University.
Altogether there were 20 apprentices nominated in 2020 and 18 nominated in 2021 by the construction trades that represent construction workers across the Upper Peninsula of Michigan.
Sponsors of the event include: MI Building and Construction Trades, B & B Electrical Contractors, MI Chapter Sheet Metal & Air Conditioning National Association, Enbridge, U.P. Mech. Contr. Assn. Sheet Metal Div., M.J. Electric, Closner Construction Co., Ironworkers Local 8, U.P. Mechanical Contractors Association, Bricklayers & Allied Craftworkers Local 2, Van Ert Electric, VAST, Operating Engineers Local 324, Operating Engineers Local 324 Labor Management Education Committee, TIC International Corporation, Aquila Michigan, UA Plumbers & Pipefitters Local 111, Plumbers & Pipefitters Local 111 Joint Apprenticeship Training Committee, Gundlach Champion, Inc., Eagle Mine, Sheet Metal Workers Local 7, Michigan Regional Council of Carpenters & Millwrights Local 1510, CR Meyer, International Brotherhood of Electrical Workers Local 906, Carhartt, Range Bank, Associated General Contractors Michigan, International Brotherhood of Electrical Workers Local 906 Joint Apprenticeship Training Committee, Rapid River Knife Works and International Union of Painters & Allied Trades DC 7 Local 1011